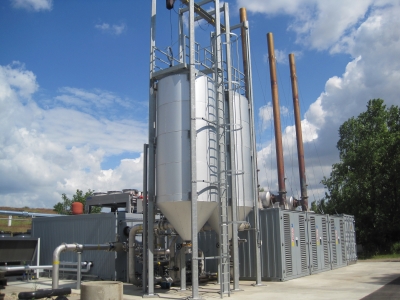 In landfills where organic waste has been deposited, biochemical conversion processes comparable to those of a bioreactor take place. The conversion process of the organic components is divided into an aerobic and an anaerobic decomposition phase.

The former phase occurs preferentially in the surface area and in freshly incorporated waste. Due to the relatively short contact time between the air and the deposited waste, however, only easily degradable substances are converted aerobically, with water and carbon dioxide being the main products.

The majority of the degradable constituents are decomposed in the anaerobic phase. The oxygen required for this is removed from the substrate in the form of bound oxygen. Under these conditions, the substrate is essentially converted into the end products methane and carbon dioxide, whereby this anaerobic degradation takes place in three sub-steps, which are not explained in detail here.

In the initial phase of the anaerobic conversion processes, mainly organic acids are produced and only much later does methane formation begin. The delayed methane production can be explained by the fact that the "acid-producing" bacteria have a multiplication rate that is higher by a factor of 10 to 20 than the "methane bacteria". Only after a period of 0.5 to 2 years after the start of deposition does an equilibrium between these groups of bacteria emerge. This is referred to as reaching the stable methane phase. 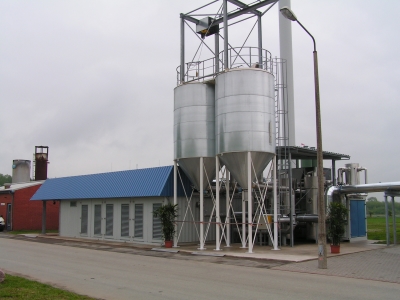 The actual landfill gas production, i.e. a quantifiable output of landfill gas, does not begin until the stable methane phase is reached. The concentration ratio of the main components methane and carbon dioxide is then in the range of 1.2 to 1.6. Assuming that the landfill gas composition is determined by these two components, this corresponds approximately to a methane content of 55 to 62% by volume.

The formation of climate-damaging methane in the landfill body makes targeted collection and treatment of the gas necessary, since the resulting landfill gas must not be released into the atmosphere. Methane is the second largest contributor to the anthropogenic greenhouse effect after carbon dioxide. For this reason, among others, landfills are usually equipped with a system of gas wells, gas collection stations, gas extraction stations gas flares, etc.

In addition to the above-mentioned main components in landfill gas, a large number of inorganic and organic constituents can also be detected in landfill gas, although in their entirety they are usually of the order of less than 1% by volume. Due to the prevailing environmental conditions in the landfill body, it must also be assumed that the landfill gas is basically saturated with water vapor.

With regard to the utilization of the landfill gas, the trace substances chlorine, fluorine, sulfur and silicon are of particular importance, as they can have a significant influence on the licensability and the operating process of a possible gas utilization plant.